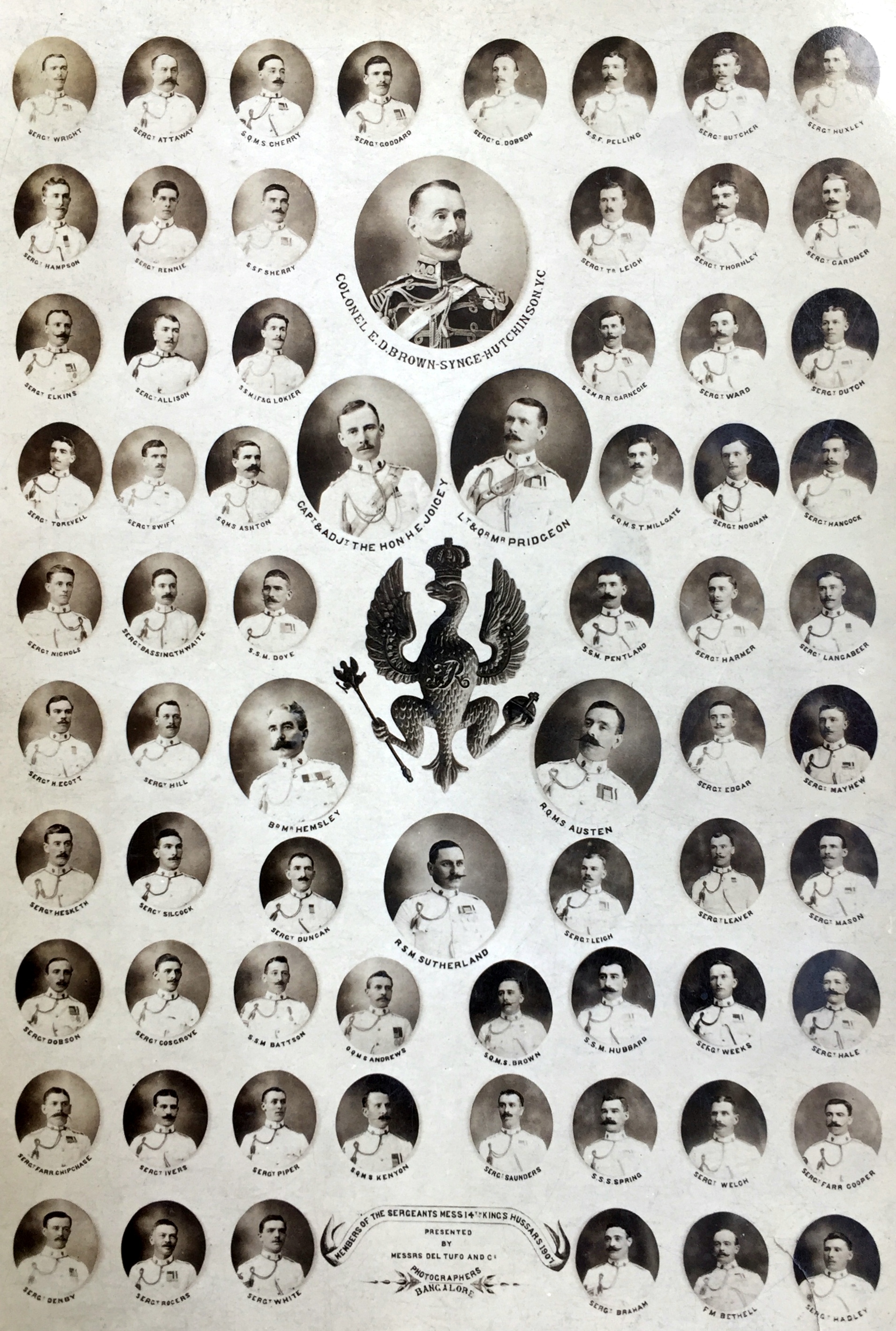 There are a lot of 14th Hussars officers’ and sergeants’ portraits squeezed onto this postcard; 70 to be precise. I bought this on eBay earlier this month and rarely has a single postcard provided me with so much research potential.

The 14th Hussars in India

The 14th Hussars had left the UK on the 5th September 1906, heading for Bombay aboard the SS Assaye which it reached on the 27 September. The regiment would remain in India until 1915, then head for Mesopotamia before returning to the UK in April 1919.  Many of the men in this photograph, which was compiled by Messrs Del Tufo and Co of Bangalore in 1907, had seen service in the Boer War, and many would go on to see service in the First World War.  As a research document, this single card is a great piece of evidence, pin-pointing these men to a specific time and place.

For the most part, the portraits on this postcard just give the man’s abbreviated rank and last name. Where possible, I have expanded the ranks and then checked the names against various databases. As is usually the case with any reearch, the more uncommon the name, the more likely it is that you will be able to quickly identify the man. There are close to 12m searchable names on this website and so typing in “14th Hussars” and the man’s name in the search box here, brought up results if the man has a surviving service record or medal index card for the First World War. Some of the men also appear on the Anglo-Boer War Register roll – also largely replicated on this site – whilst others only have entries on Boer War medal rolls, which I checked on Ancestry.

So here is my expanded list from that 1907 postcard. Where possible I have expanded ranks, adding the man’s full name or forename initials and also his regimental number.  I posted this image on my British Army Ancestors Facebook page and within an hour had a message from someone who had identified his great uncle, the first time that he had ever seen this man’s portrait. To me, that makes this project all worthwhile and is why I set up British Army Ancestors in the first place. Now my text task is to add as many of these portraits as possible to the relevant names on this site.

There are gaps below, as you will see, and I will be very pleased to hear from anyone who can help me fill in more of these details.