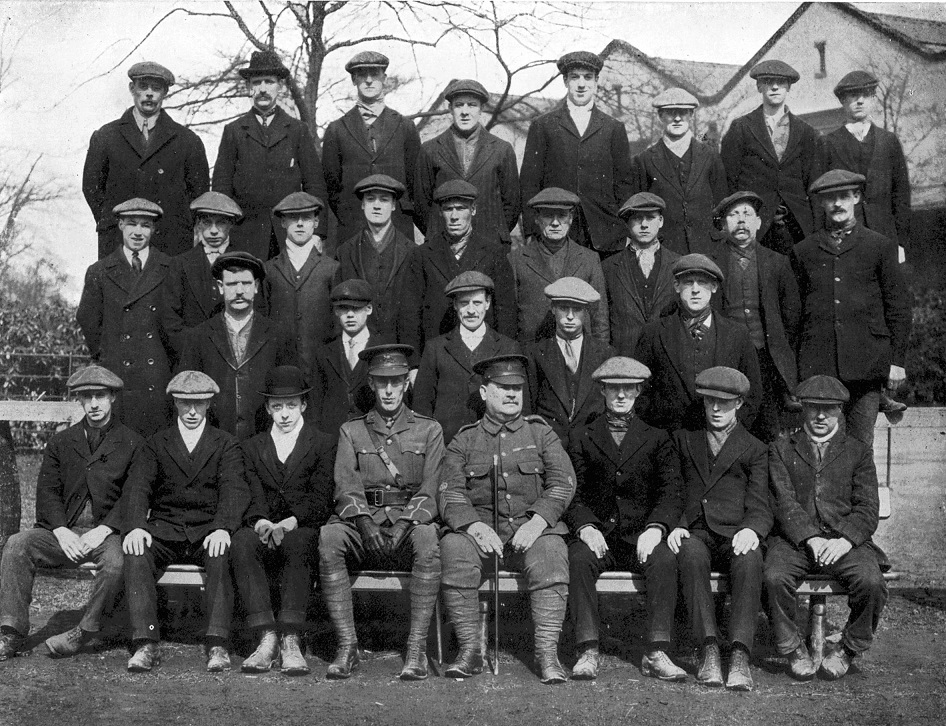 I love these group photos and this one is a very typical ‘Pals’ photo showing men of XX Platoon, E Company, 18th Manchester Regiment (3rd City Battalion). Uniforms were in short supply which is why they’re still in their civvies for this photo taken in late 1914 or early 1915.

James A Cush is the NCO in this photo and he has an interesting story. He would have been about 53 years old when this photo was taken and he was a veteran of the 1882 Egypt campaign. Although his medal ribbons are not easy to distinguish, he wears the ribbons of the 1882 Egypt Medal, the Khedive’s Star and the Long Service & Good Conduct Medal. As a colour sergeant and acting sergeant major he had been discharged from the 2nd Manchester Regiment in 1907 and, aged 46, probably assumed that his military career was over. Not so.

Men of James Cush’s experience were sorely needed and so he re-enlisted with the 18th Manchester Regiment in 1914. There are a number of different records that survive for him but by the time this photo was taken he was a Company Quarter Master Sergeant.

From 1st October 1913, British infantry battalions had been re-organised from eight companies to four. This presented something of a problem as there were now two colour sergeants in each new company. The army solved this by appointing the senior man of the pair to the new rank of company sergeant major and the junior man to the rank of company quartermaster sergeant. Although the rank of colour sergeant was then abolished, the CQMS of an infantry company continued to be generally addressed as “Colour Sergeant”.

CSMS wore the crown over the chevrons until it became an appointment of the new rank of warrant officer class II in 1915 and adopted the rank badge of a large crown on the lower sleeve.

There are also a father and son in this 18th Manchester Regiment and whilst I can’t be sure, I wouldn’t mind betting that these two men who stand third and fourth from right in the second row from the back are 11132 Thomas Hickson (senior) and 11190 Thomas Hickson (junior).

The younger Hickson was severely wounded on the 26th April 1917 receiving gunshot wounds to his chest and right arm which he nevertheless recovered from. Both men survived the war.