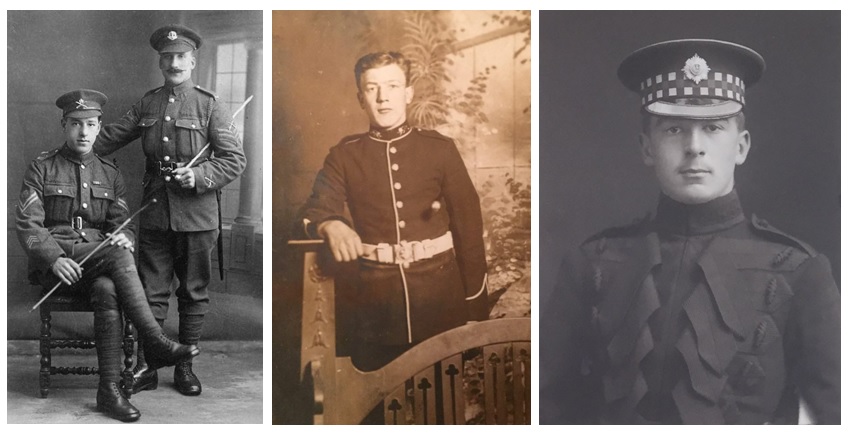 Every day on the British Army Ancestors Facebook page I take time to commemorate a British soldier. This post will look at three of the men I have remembered recently; from left to right: 19012 Cpl George Coppard, MGC;  10917 Pte William Bevan, King’s Own; and Major Guy Paget, Royal Field Artillery.

19012 Cpl George Alfred Coppard MM of the Machine Gun Corps is pictured here with a relative at the end of the First World War. George wrote one of the classic narratives of the First World War, “With a Machine Gun to Cambrai” which I first read as a teenager in the early 1980s. I was so impressed with the book that I wrote to George, then 84, at his home in Tenderden, Kent. He replied, thanking me for my interest and ended his letter to me with the words, “Thank you for writing to me and I hope that you will never be compelled to go to war.” I have his book and the letter still, and I have never forgotten him.

10917 William Thomas Bevan of the King’s own (Royal Lancaster Regiment) enlisted with the regiment on the 10th March 1913. My guess is that this photo was taken after he had completed his basic training at the regimental depot and been posted to the 1st Battalion which was then stationed at Dover. Here he is in walking out dress, complete with swagger stick tucked under his arm.

William’s time overseas was short-lived. He arived in France on the 23rd August 1914 and by the 18th October 1914 he had been reported wounded, subsequently returned to England and sent to the 2nd Northern General Hospital at Leeds. By July 1915 he had been discharged from the army on account of the wounds he had received in action.

Guy Paget was an officer in the Scots Guards when he sat for this portrait before the First World War. He would go on to raise and serve with the 7th Battalion, Northamptonshire Regiment, was wounded with the battalion at Loos on the 27th September 1915 and subsequently served with various batteries of the Royal Field Artillery in France, Flanders, Egypt and Palestine.

In later life, Paget was Deputy Lieutenant of Leicestershire, a JP and MP and also a keen huntsman. In fact it was fox-hunting which ultimately did for him when he was thrown from his horse in 1952. Ironically his daughter-in-law had been killed in a similar accident some years earlier.