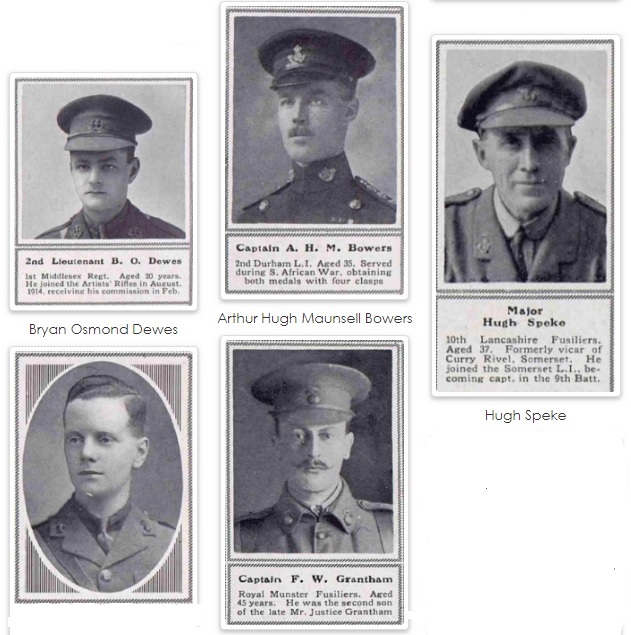 Last week I published portraits of a number of officer casualties whose photographs had appeared in The Sphere in September 1915. I’ve published an edited selection of some of these faces on this blog post. It was never part of the attestation process that a man should have his photograph taken (although it would have been a boon for today’s researchers had that been the case). Nevertheless, officers seem to have been a pretty well-photographed bunch, and there must be millions of photographs out there which were taken in studios or on the parade ground. Many of the former may not have made it into print in a man’s lifetime, but if he became a casualty there was always the opportunity to use that same portrait in his obituary.

As I was looking at The Sphere photographs I was struck by Captain Grantham’s portrait as he is a man I know of old. I see that I wrote about him on my Chailey 1914-1918 blog in 2008 and he is a good case in point of an officer whose portrait appeared in more than one publication after he had died. The photo I used on the Chailey 1914-1918 post came from De Ruvigny’s Roll of Honour, and the same photograph was also published in The Sphere. It is quite possible that he also appears in one or more regimental photos as well; see for instance the officer group photo I have published on the About page of this website.

In addition to the two sources mentioned in the previous paragraph, regimental publications, newspapers, and unit histories may also publish officer photographs. And if your British Army Ancestor was in uniform by the mid to late 1890s you might find him publications like The Navy & Army Illustrated or sone or more of the Boer War histories such as The Transvaal in War & Peace, The Transvaal War Album and With the Flag to Pretoria. Don’t forget too to run a simple Google search on the man’s namne and to check family trees on Ancestry, MyHeritage and GenesReunited.