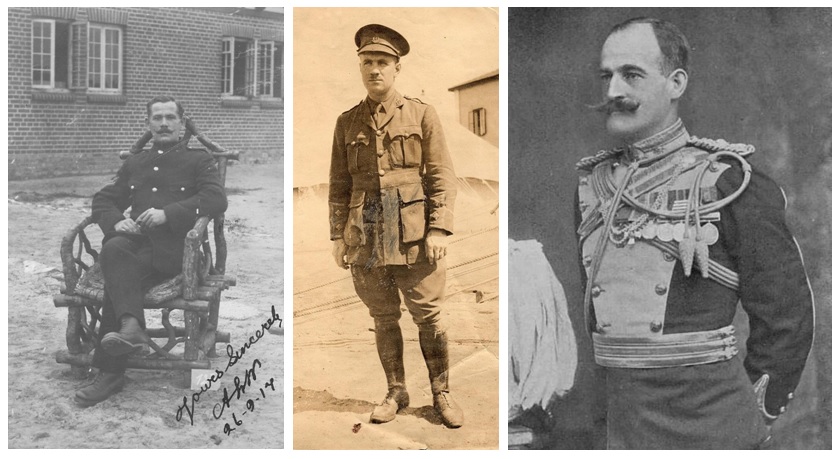 Every day on the British Army Ancestors Facebook page I take time to commemorate a British soldier. This post will look at three of the men I have remembered recently; from left to right: Arthur Leonard Wake, Lavell Hall Leeson, and Paul Aloysius Kenna.

6685 Corporal Arthur L Wake of the 18th Hussars was captured on the 24th August 1914 and spent the rest of the war as a prisoner of the Kaiser. During his incarceration he obviously met and befriended Theodore Smeets whom, I am guessing, was a Belgian prisoner of war in the same camp. Arthur sent Theodore a number of postcards and these have remained in the Smeets family for the last hundred years. Theodore’s grandson, Marc Smeets, has kindly uploaded the photographs to http://britisharmyancestors.co.uk/and I am pleased to feature one of those images here. Both men were at Gosloh PoW camp near Hannover when these photographs were taken.

Lavell Leeson ended the First World War as a captain with the Royal Army Medical Corps but he was obviously a lieutenant when this photograph of him was taken in 1916.

Lavell served overseas from August 1915 and appears to have emigrated to Canada in 1918. When he applied for his campaign medals in 1923 – officers had to apply for their medals, unlike other ranks who were sent theirs automatically – the address he gave was the Vancouver General Hospital in British Columbia, and I presume he was working there as a doctor. My thanks to LMLT for uploading this photograph tohttps://britisharmyancestors.co.uk/.

Brigadier-General Paul Aloysius Kenna had already won the VC and been awarded the DSO when this portrait was taken of him before the First World War. I haven’t identified the medal next to his DSO, but the medals thereafter, reading from the left, are the Sudan Medal, QSA, KSA and Khedive’s Sudan.

Serving with the 21st Lancers during the Sudan campaign, the then Major Kenna was awarded the VC for his part in the famous charge at Omdurman when he carried another man to safety whose horse had been shot from under him.

Brigadier Kenna added three more campaign medals for the First World War to his already impressive collection but he never lived to wear them. He died of wounds received at Gallipoli on the 30th August 1915 aged 53. My thanks again to Templeria for uploading this photograph which appeared in the Illustrated Sporting and Dramatic News on the 18th September 1915. https://britisharmyancestors.co.uk/