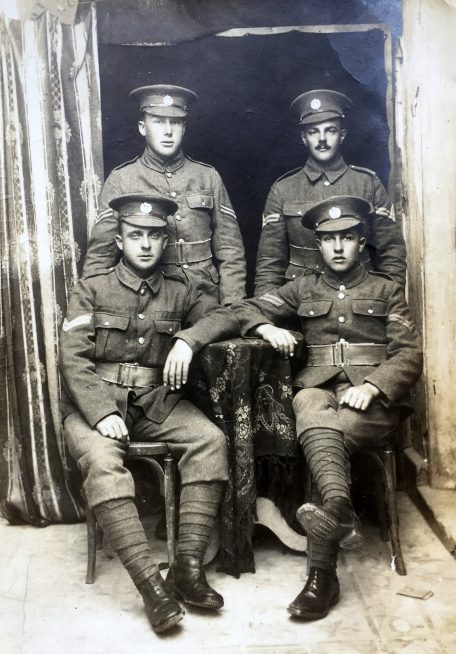 I bought this postcard many years ago and whilst I sold the majority of my collection in 2010, I somehow hung onto this one. I am glad I did so. These men are all corporals serving with the Royal Engineers and the photo was taken when they were serving overseas; it’s one of my favourite cards.

On the reverse of this particular “carte postale” there are four names and so I know that the two men standing are “R French” and “The one and only” and that the two seated are “F Smith” and “Kidby C”. Kidby C is 133066 Pioneer Charles N Kidby, the only identifiable man of the four, but I don’t know whether he’s the man on the left or the right.

Charles Kidby arrived in France in November 1915 and he survived the war, being discharged to Class Z of the Army Reserve on the 10th February 1919. There is no surviving service record for this man and neither do his medal index card or medal roll entries add anything useful about the unit he served with. Helpfully though, there is a fragment that survives in WO 363, probably from Part II Orders. Dated 22nd September 1917 from RE Base Records. The document notes the 196th Land Drainage Company, Royal Engineers and records that Charles had overstayed his leave from 6.30am on the 23rd August 1917 until 4pm on the 24th August 1917. He was awarded 14 days’ Field Punishment No 2 and forfeited two days’ pay.

Howard Williamson notes that there were two land drainage companies: 196 and 197, the personnel for these companies recruited in the Fenlands of Lincoln and paid 3 shillings a day. 196 Land Drainage company served with the 1st Army at Vimy in 1917 and by November 1918 was serving with the 2nd and 5th Armies.

Little could Charles have realised that his petty misdemeanour would at least provide future generations of researchers – and potentially family – with the name of at least one unit he served with. It is the only surviving reference as far as I can see. Unfortunately, his three companions remain anonymous.