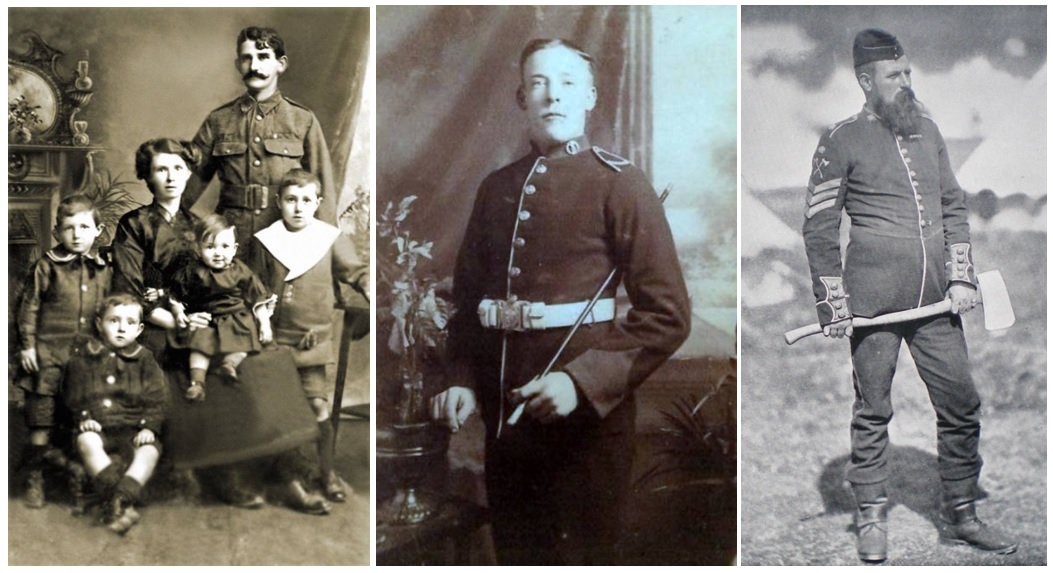 Every day on the British Army Ancestors Facebook page I take time to commemorate a British soldier. This post will look at three of the men I have remembered recently.  From left to right:

David Clifford had two periods of service with the British Army: the first from 1897 to 1909 when he served as a career soldier with the South Wales Borderers, earning Boer War campaign medals into the bargain; and the second when he re-enlisted in his old regiment in August 1914, volunteering almost immediately (his regimental number dates to about the 14th August). The photograph dates to the Firts World War, David Clifford pictured with his young family. happily he survived the war.

Claude Hewlett, pictured some time after 1913, wears the uniform of the Middlesex Regiment (Duke of Cambridge’s Own); yellow facings on a red tunic. He would also serve with the Royal West Kent Regiment and also survive the war.

The portrait of 5310 Pioneer Sergeant Harry Tesh of the 1st Battalion, Coldstream Guards was published in the Navy & Army Illustrated on the 17th April 1896. The caption underneath it reads:

“The pioneers in the Army comprise a small body of men attached to each infantry regiment (one to each company), for the purpose, particularly on active service, of clearing away and cutting down obstacles in the way of the troops. For this duty each man carries a particular tool or special implement. The pioneers form also a small corps of regimental artificers for general work, either in barracks or in camp, and are employed in the regimental workshops, and assist in the instruction of soldiers desirous of learning a trade. They are usually specially enlisted from among artizans and skilled workmen. Pioneer-Sergeant H Tesh, of the 1st Coldstream Guards, who is in charge of the pioneers of his Battalion, is a Sheffield man. He enlisted in August, 1882 at the age of 21, and worked his way up through the various subordinate grades to his present position to which he was promoted in April 1890. He saw service in Egypt, and was at Suakim in 1885, for which he wears the Egyptian medal and Khedive’s star. The pioneers march past at the head of the regiment.”