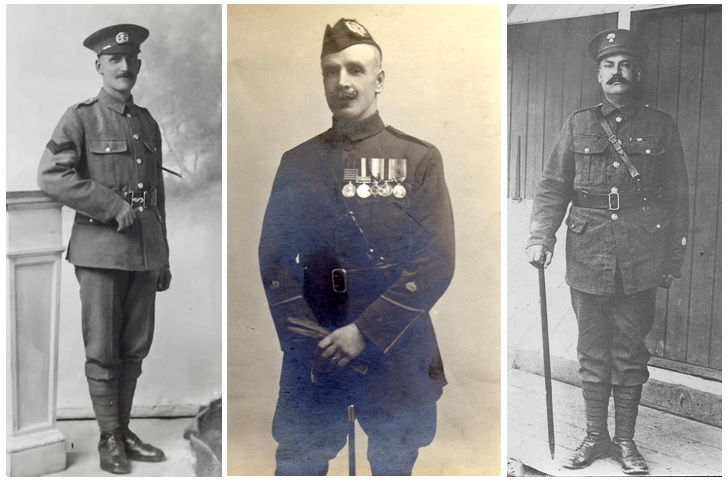 Every day on the British Army Ancestors Facebook page I take time to commemorate a British soldier. This post will look at three of the men I have remembered recently; from left to right: George Payne, Allan Lynch & Frank Atkins.

L/11661 George A. Payne was a pre-war regular soldier who had originally joined the Middlesex Regiment in 1907 and subsequently saw service during the First World War, serving overseas in France from the 27th August 1914. He claimed the clasp and roses for his 1914 Star in August 1920, although the clasp is not offered with the replacement ribbon on his star. This undated photo shows George wearing a lance-corporal’s stripe.

His regimental number rerlates to his First World War service and was issued when he joined the regiment in February 1915. I am guessing he was a time-expired soldier in 1915 whose experience of soldiering was soon acknowledged and rewarded as he arived overseas in France as a CSM with the 11th Battalion in September 1915. Nevertheless, his service was short-lived and he was discharged as a result of sickness in August 1916, thus also earning for himself a silver war badge.

2089 RSM Francis (Frank) Atkins of the Grenadier Guards was attached to the 2nd Battalion, Honourable Artillery Company when this undated photograph was taken some time before October 1916.

Born on the 11th March 1871, Frank had originally enlisted with the Grenadier Guards on the 16th October 1889 and he wears the campaign medals for Sudan (1896-1898) on his left breast. During the First World War he served overseas from the 18th September 1914 and was Mentioned in Dispatches. Discharged on the 23rd October 1916 on the termination of his second period of engagement, he was then commissioned in the Royal Flying Corps on the 16th December 1917 and served with the RFC (and RAF) until discharged to the Unemployed List in June 1919. By then, he had served his country for close to thirty years.