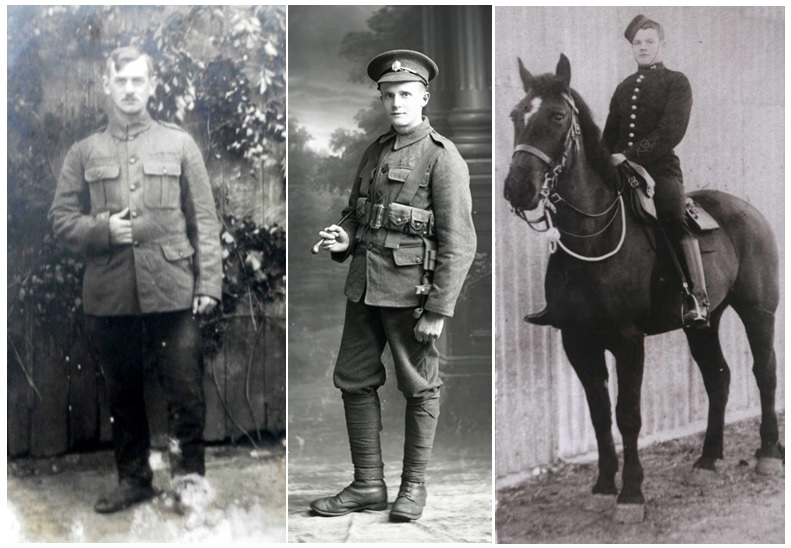 Every day on the British Army Ancestors Facebook page I take time to commemorate a British soldier. This post will look at three of the men I have remembered this week.

8037 Pte Ernest Squires of the Somerset Light Infantry sent this photograph of himself (far left) from Doberitz PoW camp on the 13th June 1916. He had been captured in 1914 and would presumably spend the rest of the war as a guest of the Kaiser.

The address on the postcard is Mrs G Bowhay, Ross Mayo, Revilstoke, Nr Plymouth. He appears twice on my database of men who would later (belatedly) be sent Princess Mary’s Christmas gift tin from 1914. Two addresses give another contact in Plymouth and one in Lower Weston, Somerset.

James Goodson is till the oldest man I have ever met. He was 104 when I interviewed him at the Royal Star and Garter Home in Richmond in 1988 and he lived to be 106. James was born in Bethnal Green on Boxing Day in 1883 and poverty probably drove him into the army – as it had traditionally done so for so many men – in 1902.

When James joined the Royal Field Artillery as a driver in 1902, men were just coming home from the Boer War. He was given the number 25907 and signed up for three years with the colours and nine years on the reserve. He was just a few days short of being discharged from the army when Britain went to war and was immediately recalled from the reserve, servinghis King and country for the next four and a half years. He was a fascinating character, as straight as a die, and although I only met him the once I remember him with great fondness. You can read a snippet from my interview with him on my World War 1 Veterans blog.