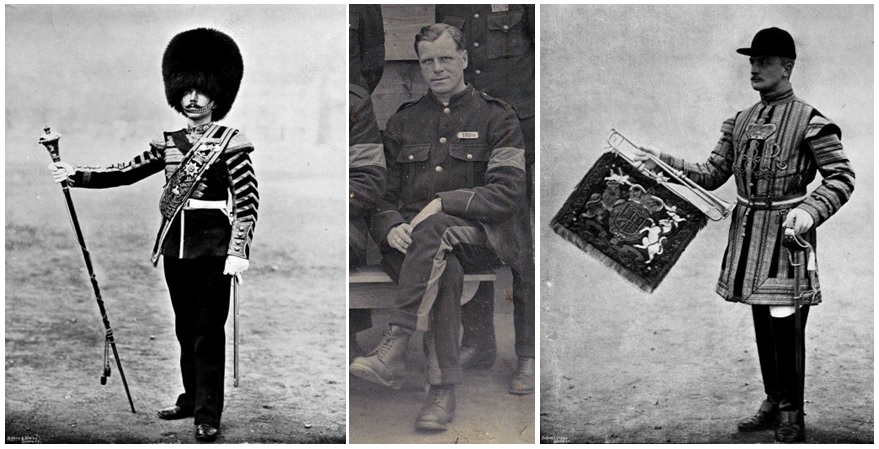 Every day on the British Army Ancestors Facebook page I take time to commemorate a British soldier. This post will look at three of the men I have remembered recently.

The photograph, above left, was published in the Navy &v Army Illustrated on the 20th December 1895. The caption underneath reads:

“Our portrait of Drum Major Patrick of the 2nd Battalion Coldstream Guards is particularly interesting, in that the gallant Drum-Major besides being himself a credit to his corps belongs to it by hereditary association. His father served in the 2nd Coldstream Guards, and three of his uncles fell in action while with the battalion in the Russian War. Drum-Major Patrick himself enlisted in the 2nd Coldstream Guards in 1875, at the age of fourteen, and served with the battalion in the Egyptian Campaign of 1882, for which he wears the medal and star. He is an East Anglian, from Great Yarmouth, and has the good conduct medal.”

Philip Williams (centre) originally enlisted with the 7th Durham Light Infantry on the 3rd or 4th September 1914 and was issued with the regimental number 2654. His six-digit number was issued when the Territorial Force as a whole underwent a re-numbering exercise in early 1917.

This photograph of Pte Williams was taken at a German PoW camp in 1918. His uniform here is blue and the yellow arm band has been sewn into his jacket, matching the yellow stripe on his trousers. His prisoner of war number – possibly 10250 – is on the badge over his breast pocket. I could find no information online that gives Philip’s date of capture, although he had been overseas since April 1915. He does though, appear on a list of men repatriated to England who arrived at Hull – via Holland – on the 23rd November 1918.

Sam Goodhall (right) enlisted as a 14-year-old boy with the 2nd Life Guards on the 4th May 1882. This fine study of him appeared in The Navy & Army Illustrated on the 3rd January 1896. The caption reads:

“The subject of our illustration prefers to be known as ‘Trumpet-Major’, the older and historic title of his rank, which is analogous to the ” Drum-Major” of Infantry. Corporal-Trumpeter is his official designation. He is a soldier of thirteen years’ service, having joined the 2nd Life Guards as a boy as long ago as 1882. Corporal-Trumpeter Goodhall, like so many other Guardsmen, has a family association with his famous regiment, in which his father served as a non-commissioned officer for twenty-five years. The cost of his gorgeous uniform, coat, cap, trumpet and banner, means about £120.”

Sam Goodhall’s father was 162 Samuel Goodhall who attested for 12 years with the 2nd Life Guards in May 1860 and ended up serving 22 years. Both men have surviving service records which can be viewed on Findmypast.