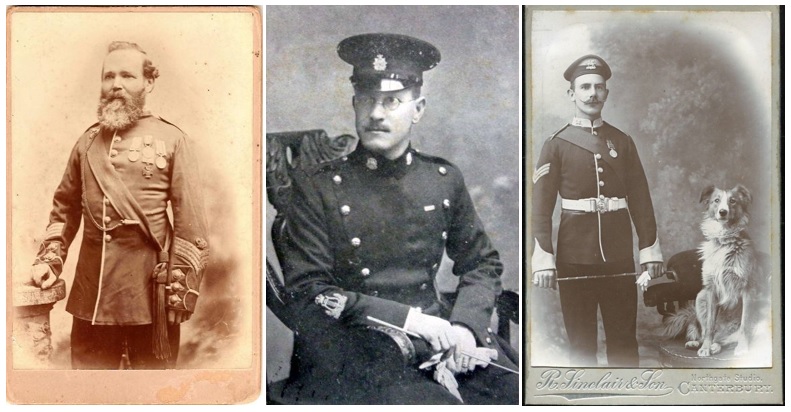 Every day on the British Army Ancestors Facebook page I take time to commemorate a British soldier. This post will look at three of the men I have remembered recently.  From left to right:

William Napier was born in Keighley, Yorkshire on the 24th August 1824 and he joined the 13th (1st Somersetshire) (Prince Albert’s light Infantry) Regiment of Foot on the 10th December 1846. He served in the Crimean War and in the Indian Mutiny campaign where he was awarded the Victoria Cross; his act of gallantry being to rescue Private Milne of the same regiment whilst wounded and under fire from the enemy.

In this studio portrait, Sgt Napier wears his Crimea Medal and Turkish Crimea Medal, the Indian Mutiny Medal and his Victoria Cross. Uncommonly he wears his sergeant’s sash across his right shoulder. Sergeants wore their sash across the right shoulder whilst officers wore their sash across the left shoulder. However – and there is always an exception to every rule – sergeants of the Somerset Light Infantry wore their sashes across the left shoulder. This was in recognition of the regiment’s performance at Culloden when, all the officers being killed, the sergeants performed the roles of officers until the end of the battle. My guess is that Sgt Napier – or the photographer – felt that in this instance the sash would detract from his fine medal collection if worn across his left shoulder. I tend to agree.

William George Taylor had joined the Royal Irish Rifles in 1886 as a 14-year-old boy and by December 1901 he was bandmaster with the Royal Garrison Regiment. He transferred to the Border Regiment in December 1905 and served with the 2nd and 3rd Battalions, moving to the 10th Battalion in 1915, ultimately serving for over 31 years.

George Taylor’s military history sheet reads like a gazeteer of British military stations: Nova Scotia, Gibraltar, Egypt, Malta, India, UK, Malta (again), South Africa, UK, South Africa (again), and finally home. He married in Bombay in 1896 and was awarded a Long Service and Good Conduct Medal in 1904 (with, had he but known it, a further thirteen years in the army still ahead of him); a remarkable British Army career by any standard.

This unknown soldier in my final photo is a sergeant in The Buffs (East Kent Regiment) and he wears a Queen’s South Africa medal for service in the Boer War together with three clasps. He also wears the much hated Brodrick Cap, named after the then Secretary of State for War, John Brodrick, although it later transpired that the design had been chosen by Edward, Prince of Wales; later King Edward VII. The Brodrick Cap was introduced in 1902, widely condemned by 1904, and phased out by 1907. To modern day historians it is a useful way of dating photographs of our British Army Ancestors.