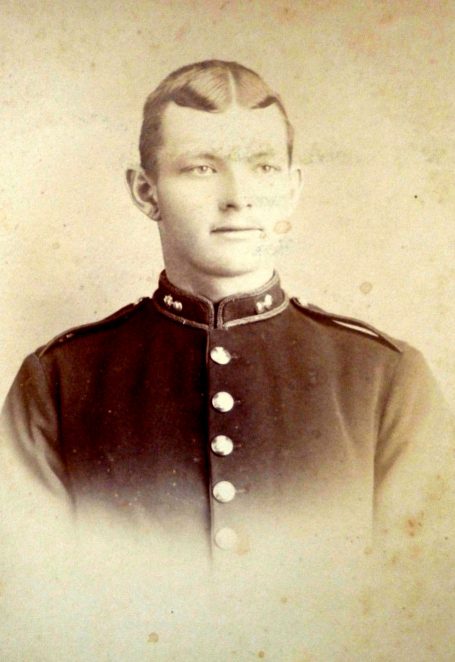 “The soldier’s chief pride and glory in the early stages of his career seems to lie in his hair. We have all of us, no doubt, noted the peculiarly natty manner in which he is then wont to dress his locks, and, with his forage cap stuck jauntily on the side of his head, promenades the town during the evening hours for the express purpose of, as he puts it, “knocking ‘em!” The particularly graceful – I had almost written greaseful – habit that he affects of allowing a large and well-oiled lock to protrude over his forehead with an artistic upward curl is known in the ranks as “sporting a quiff”.

“To cultivate a quiff – the orthography of the word is a little doubtful – is the great aim of the average recruit’s existence. Towards the attainment of this highly desirable adornment he proceeds as follows: First of all, if he is successful in eluding the ever-watchful eye of the sergeant-major (which, by the way, is a difficult matter), he suffers his hair to grow long in front and to hang over his forehead. This lock he plentifully besmears with grease or soap, and trains to hang in two graceful and oily festoons over his temples, brushing them well up at the side. For this purpose he makes use of the cleaning rod of his rifle as a curling iron. Then, with his cap balanced carefully on the side of his head, he sallies forth to conquer in all the pride of his glory and greasiness.

“Of course, a soldier is not allowed to appear on parade like this. On such occasions the offending “quiff’ is carefully hidden under his cap. Although there are frequent “hair inspections”, at which,if a man’s hair appears to be growing unduly long in front, he is ordered to have it cut at once, he, nevertheless, is generally successful, with the aid of a “nimble twopence” – the price of a pint – in persuading the regimental barber to preserve intact his prize adornment from the devastating scissors.

“With regard to the soldier’s hair, Lord Wolseley [Adjutant General], in his well-known “Pocket Book” says,

“In the field no man’s hair should exceed half an inch in length; this is essential for the well-being and cleanliness of soldiers… No man can have that smart bearing – which is the outward mark of a soldier – who allows his hair to be so long that he can part it… Hair is the glory of a woman, but the shame of a man.””

Horace Wyndham, The Queen’s Service [Published in 1900 but writing of army life in 1890]