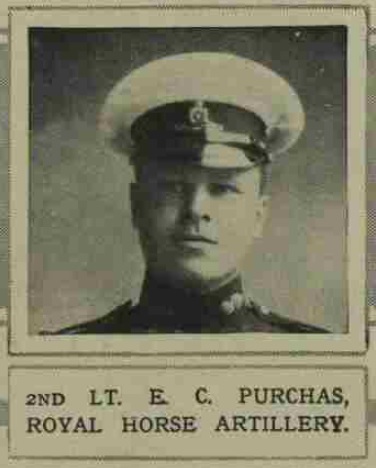 Some while ago, whilst looking through a soldier’s papers in series WO 363, I came across two pages which detailed an accident which befell men of V Battery, Royal Horse Artillery at Serny, France on the 2nd March 1915. A Board, held at Croix Barbee on the 15th March, heard evidence from three witnesses, 2nd Lieutenant Wingate Gray, Acting Battery Sergeant Major Morley and Sergeant Watkins. I include extracts from their testimonies, below, followed by a list of the casualties.

“… We had successfully fired the mortar three times, and on each occasion we considered the fuse in the bomb was too long. Previous to firing the fourth shot Major Goldie cut the fuse down as short as possible. The plug and the detonator were fixed in the bomb and carefully sealed in with plasticive. The bomb was then loaded in the usual manner. The fuze igniting the charge – about 4″ long, was then lit, and I cautioned those standing round to stand clear. A terrific explosion followed. I realized at once what had happened – viz, a premature in the bore – and saw a number of men wounded on the ground. It was subsequently ascertained that six men were killed outright and seven died of wounds including Major Goldie and 2nd Lieutenant Purchas… I consider the cause of the premature was due to the time fuze in the bomb being cut too short…”

“On the 2nd March 1915, about 2pm, the whole battery paraded to see the trench mortar fired. It was successfully fired three times and each time the bomb fell to the ground but did not explode for several seconds. Previous to firing the fourth round, in order to obtain a burst immediately the bomb touched the ground, Major Goldie cut the fuze down as close as possible top the wooden plug… Immediately the fuze reached the powder charge there was a slight report and after a few seconds, thinking that it was a miss-fire, all the men closed in. As soon as they got within a few yards there was a violent explosion and several then fell to the gorund…”

“The mortar was loaded with the smallest charge on the range table, and the bomb loaded in the usual way. I was standing close by and saw everything that was going on.”

The portrait photograph of 2nd Lt Purchas appeared in the Illustrated London News edition of the 27th March 1915. I have added the photo to this man’s profile on British Army Ancestors and would be interested to add photos of any of the other men listed above.